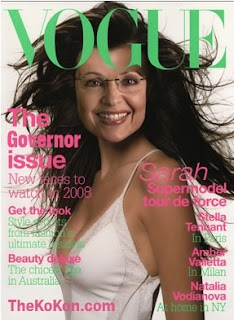 Sarah Louise, as she would be called if she was a Southern girl, is real easy to look at. A great talker too, an animated, articulate beauty queen. Sarah Palin's good looks and personality, plus her huge drive for power and control have made her mayor of a small town in Alaska and ultimately the Governor of that state for the past 22 months. Now she could possibly be Vice President of the USA. It is time for a voter reality check list. Would you vote for any Vice Presidential candidate who:

*Was plucked from relative obscurity and offered as a candidate less than two months before you are to vote, and who refused to release any medical records whatsoever?

*Who has been cloistered from the press except for a couple of national interviews which showed embarrassing ignorance of basic facts, a clueless inability to answer even softball questions and who thinks the Vice President, "Runs the Senate?"

*Who has recently been judged by bipartisan peers to have abused power as a State Governor and who is under continuing investigation for alleged petty and personal pressuring of underlings and other actions?

*A person about whom you really know nothing at all except the carefully orchestrated campaign hoopla and that he or she can easily reel off lies, half truths and the nastiest rabid fear mongering character assassination in recent Republican history?

*A mother of five children, with three of them still adolescents and one of those a Down Syndrome baby who demands extra special parental care?

*A fundamentalist, glossolalia speaking Pentecostal, whose teen aged daughter will be giving birth to an illegitimate child unless a rushed up wedding can be planned right after the election? Would it dare be a White House wedding if the the candidate won?

Now, imagine the Veep and her oilfield worker hubby, who lacks a college degree, in the real world of white tie state dinners making small talk with learned dignitaries and leaders from around the world. Eight years of one socially inept moron has caused enough international cringing wouldn’t you think?

Senator McCain’s desperate, cynical selection of Sarah Palin should be reason enough to run like you had seen a pink snake if asked to vote Republican. But as a final test, take McCain and Palin’s own campaign key words and hold them both up to those claims. If you think they pass then go to the polls with a clear conscience: